To this day, the models that we have discussed so far remain appropriate options when we are dealing with tabular data. By tabular, we mean that the data consist of rows corresponding to examples and columns corresponding to features. With tabular data, we might anticipate that the patterns we seek could involve interactions among the features, but we do not assume any structure a priori concerning how the features interact.

Sometimes, we truly lack knowledge to guide the construction of craftier architectures. In these cases, an MLP may be the best that we can do. However, for high-dimensional perceptual data, such structure-less networks can grow unwieldy.

For instance, let’s return to our running example of distinguishing cats from dogs. Say that we do a thorough job in data collection, collecting an annotated dataset of one-megapixel photographs. This means that each input to the network has one million dimensions. Even an aggressive reduction to one thousand hidden dimensions would require a fully connected layer characterized by \(10^6 \times 10^3 = 10^9\) parameters. Unless we have lots of GPUs, a talent for distributed optimization, and an extraordinary amount of patience, learning the parameters of this network may turn out to be infeasible.

A careful reader might object to this argument on the basis that one megapixel resolution may not be necessary. However, while we might be able to get away with one hundred thousand pixels, our hidden layer of size 1000 grossly underestimates the number of hidden units that it takes to learn good representations of images, so a practical system will still require billions of parameters. Moreover, learning a classifier by fitting so many parameters might require collecting an enormous dataset. And yet today both humans and computers are able to distinguish cats from dogs quite well, seemingly contradicting these intuitions. That is because images exhibit rich structure that can be exploited by humans and machine learning models alike. Convolutional neural networks (CNNs) are one creative way that machine learning has embraced for exploiting some of the known structure in natural images.

Imagine that we want to detect an object in an image. It seems reasonable that whatever method we use to recognize objects should not be overly concerned with the precise location of the object in the image. Ideally, our system should exploit this knowledge. Pigs usually do not fly and planes usually do not swim. Nonetheless, we should still recognize a pig were one to appear at the top of the image. We can draw some inspiration here from the children’s game “Where’s Waldo” (depicted in Fig. 7.1.1). The game consists of a number of chaotic scenes bursting with activities. Waldo shows up somewhere in each, typically lurking in some unlikely location. The reader’s goal is to locate him. Despite his characteristic outfit, this can be surprisingly difficult, due to the large number of distractions. However, what Waldo looks like does not depend upon where Waldo is located. We could sweep the image with a Waldo detector that could assign a score to each patch, indicating the likelihood that the patch contains Waldo. In fact, many object detection and segmentation algorithms are based on this approach (Long et al., 2015). CNNs systematize this idea of spatial invariance, exploiting it to learn useful representations with fewer parameters. We can now make these intuitions more concrete by enumerating a few desiderata to guide our design of a neural network architecture suitable for computer vision:

Let’s see how this translates into mathematics.

Let \([\mathbf{X}]_{i, j}\) and \([\mathbf{H}]_{i, j}\) denote the pixel at location \((i,j)\) in the input image and hidden representation, respectively. Consequently, to have each of the hidden units receive input from each of the input pixels, we would switch from using weight matrices (as we did previously in MLPs) to representing our parameters as fourth-order weight tensors \(\mathsf{W}\). Suppose that \(\mathbf{U}\) contains biases, we could formally express the fully connected layer as

This reduces the number of parameters from \(4 \cdot 10^6\) to \(4 \Delta^2\), where \(\Delta\) is typically smaller than \(10\). As such, we reduced the number of parameters by another 4 orders of magnitude. Note that (7.1.3), in a nutshell, is what is called a convolutional layer. Convolutional neural networks (CNNs) are a special family of neural networks that contain convolutional layers. In the deep learning research community, \(\mathbf{V}\) is referred to as a convolution kernel, a filter, or simply the layer’s weights that are learnable parameters.

While previously, we might have required billions of parameters to represent just a single layer in an image-processing network, we now typically need just a few hundred, without altering the dimensionality of either the inputs or the hidden representations. The price paid for this drastic reduction in parameters is that our features are now translation invariant and that our layer can only incorporate local information, when determining the value of each hidden activation. All learning depends on imposing inductive bias. When that bias agrees with reality, we get sample-efficient models that generalize well to unseen data. But of course, if those biases do not agree with reality, e.g., if images turned out not to be translation invariant, our models might struggle even to fit our training data.

This dramatic reduction in parameters brings us to our last desideratum, namely that deeper layers should represent larger and more complex aspects of an image. This can be achieved by interleaving nonlinearities and convolutional layers repeatedly.

That is, we measure the overlap between \(f\) and \(g\) when one function is “flipped” and shifted by \(\mathbf{x}\). Whenever we have discrete objects, the integral turns into a sum. For instance, for vectors from the set of square summable infinite dimensional vectors with index running over \(\mathbb{Z}\) we obtain the following definition:

This looks similar to (7.1.3), with one major difference. Rather than using \((i+a, j+b)\), we are using the difference instead. Note, though, that this distinction is mostly cosmetic since we can always match the notation between (7.1.3) and (7.1.6). Our original definition in (7.1.3) more properly describes a cross-correlation. We will come back to this in the following section.

Returning to our Waldo detector, let’s see what this looks like. The convolutional layer picks windows of a given size and weighs intensities according to the filter \(\mathsf{V}\), as demonstrated in Fig. 7.1.2. We might aim to learn a model so that wherever the “waldoness” is highest, we should find a peak in the hidden layer representations. 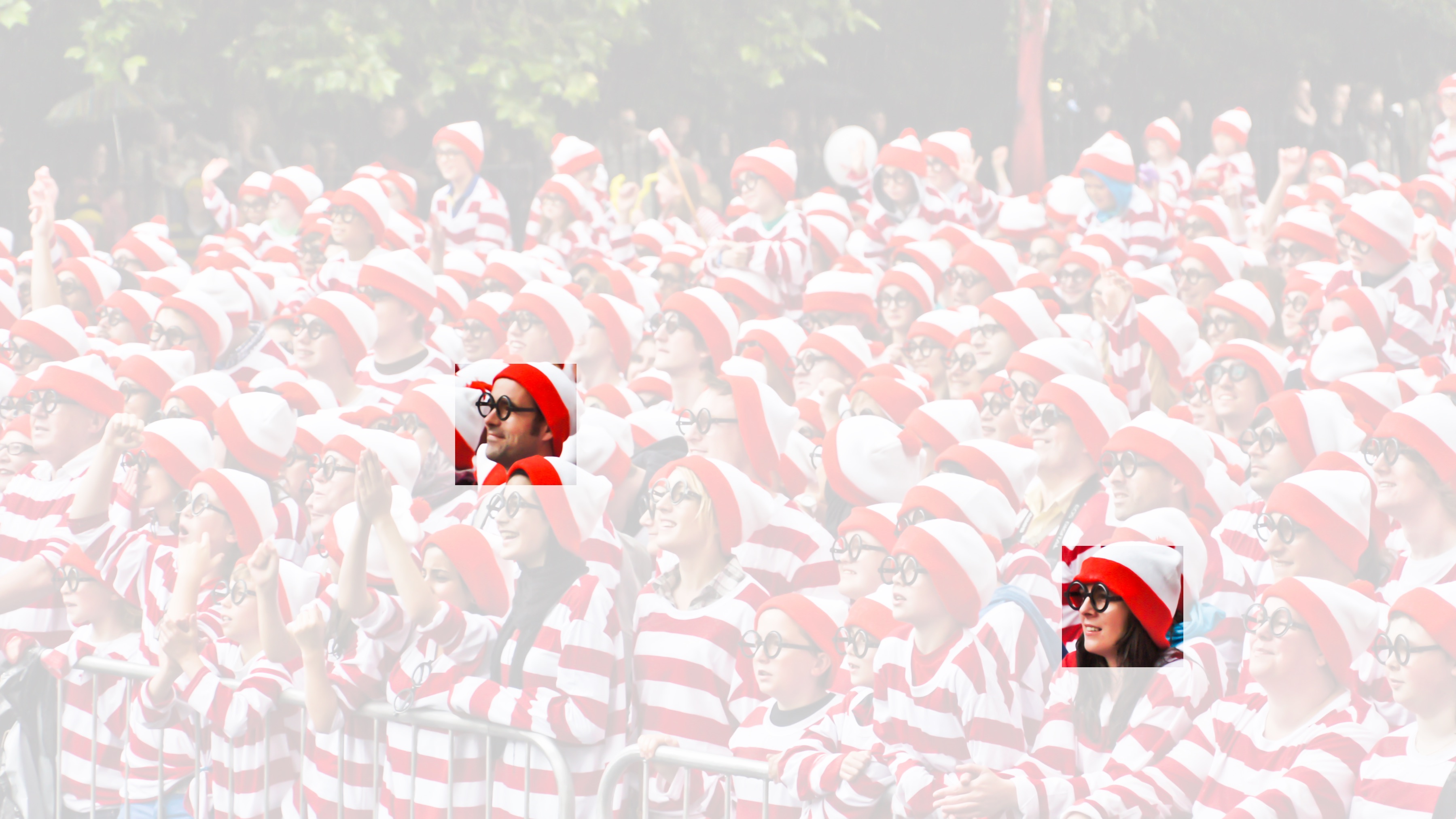 There is just one problem with this approach. So far, we blissfully ignored that images consist of 3 channels: red, green, and blue. In sum, images are not two-dimensional objects but rather third-order tensors, characterized by a height, width, and channel, e.g., with shape \(1024 \times 1024 \times 3\) pixels. While the first two of these axes concern spatial relationships, the third can be regarded as assigning a multidimensional representation to each pixel location. We thus index \(\mathsf{X}\) as \([\mathsf{X}]_{i, j, k}\). The convolutional filter has to adapt accordingly. Instead of \([\mathbf{V}]_{a,b}\), we now have \([\mathsf{V}]_{a,b,c}\).

Moreover, just as our input consists of a third-order tensor, it turns out to be a good idea to similarly formulate our hidden representations as third-order tensors \(\mathsf{H}\). In other words, rather than just having a single hidden representation corresponding to each spatial location, we want an entire vector of hidden representations corresponding to each spatial location. We could think of the hidden representations as comprising a number of two-dimensional grids stacked on top of each other. As in the inputs, these are sometimes called channels. They are also sometimes called feature maps, as each provides a spatialized set of learned features to the subsequent layer. Intuitively, you might imagine that at lower layers that are closer to inputs, some channels could become specialized to recognize edges while others could recognize textures.

There are still many operations that we need to address. For instance, we need to figure out how to combine all the hidden representations to a single output, e.g., whether there is a Waldo anywhere in the image. We also need to decide how to compute things efficiently, how to combine multiple layers, appropriate activation functions, and how to make reasonable design choices to yield networks that are effective in practice. We turn to these issues in the remainder of the chapter.

In this section we derived the structure of convolutional neural networks from first principles. While it is unclear whether this is what led to the invention of CNNs, it is satisfying to know that they are the right choice when applying reasonable principles to how image processing and computer vision algorithms should operate, at least at lower levels. In particular, translation invariance in images implies that all patches of an image will be treated in the same manner. Locality means that only a small neighborhood of pixels will be used to compute the corresponding hidden representations. Some of the earliest references to CNNs are in the form of the Neocognitron (Fukushima, 1982).

A second principle that we encountered in our reasoning is how to reduce the number of parameters in a function class without limiting its expressive power, at least, whenever certain assumptions on the model hold. We saw a dramatic reduction of complexity as a result of this restriction, turning computationally and statistically infeasible problems into tractable models.

Adding channels allowed us to bring back some of the complexity that was lost due to the restrictions imposed on the convolutional kernel by locality and translation invariance. Note that channels are quite a natural addition beyond red, green, and blue. Many satellite images, in particular for agriculture and meteorology, have tens to hundreds of channels, generating hyperspectral images instead. They report data on many different wavelengths. In the following we will see how to use convolutions effectively to manipulate the dimensionality of the images they operate on, how to move from location-based to channel-based representations and how to deal with large numbers of categories efficiently.