So far in our image classification and machine translation experiments, models were trained on datasets with input-output examples from scratch to perform specific tasks. For example, a transformer was trained with English-French pairs (Section 11.7) so that this model can translate input English text into French. As a result, each model becomes a specific expert that is sensitive to even slight shift in data distribution (Section 4.7). For better generalized models, or even more competent generalists that can perform multiple tasks with or without adaptation, pretraining models on large data has been increasingly common.

Given larger data for pretraining, the transformer architecture performs better with an increased model size and training compute, demonstrating superior scaling behavior. Specifically, performance of transformer-based language models scales as a power-law with the amount of model parameters, training tokens, and training compute (Kaplan et al., 2020). The scalability of transformers is also evidenced by the significantly boosted performance from larger vision transformers trained on larger data (discussed in Section 11.8). More recent success stories include Gato, a generalist model that can play Atari, caption images, chat, and act as a robot (Reed et al., 2022). Gato is a single transformer that scales well when pretrained on diverse modalities including text, images, joint torques, and button presses. Notably, all such multi-modal data is serialized into a flat sequence of tokens, which can be processed akin to text tokens (Section 11.7) or image patches (Section 11.8) by transformers.

When only the transformer encoder is used, a sequence of input tokens is converted into the same number of representations that can be further projected into output (e.g., classification). A transformer encoder consists of self-attention layers, where all input tokens attend to each other. For example, vision transformers depicted in Fig. 11.8.1 are encoder-only, converting a sequence of input image patches into the representation of a special “<cls>” token. Since this representation depends on all input tokens, it is further projected into classification labels. This design was inspired by an earlier encoder-only transformer pretrained on text: BERT (Bidirectional Encoder Representations from Transformers) (Devlin et al., 2018).

Fig. 11.9.1 Left: Pretraining BERT with masked language modeling. Prediction of the masked “love” token depends on all input tokens before and after “love”. Right: Attention pattern in the transformer encoder. Each token along the vertical axis attends to all input tokens along the horizontal axis.¶

BERT is pretrained on text sequences using masked language modeling: input text with randomly masked tokens is fed into a transformer encoder to predict the masked tokens. As illustrated in Fig. 11.9.1, an original text sequence “I”, “love”, “this”, “red”, “car” is prepended with the “<cls>” token, and the “<mask>” token randomly replaces “love”; then the cross-entropy loss between the masked token “love” and its prediction is to be minimized during pretraining. Note that there is no constraint in the attention pattern of transformer encoders (right of Fig. 11.9.1) so all tokens can attend to each other. Thus, prediction of “love” depends on input tokens before and after it in the sequence. This is why BERT is a “bidirectional encoder”. Without need for manual labeling, large-scale text data from books and Wikipedia can be used for pretraining BERT.

Fig. 11.9.2 illustrates fine-tuning of BERT for sentiment analysis. The transformer encoder is a pretrained BERT, which takes a text sequence as input and feeds the “<cls>” representation (global representation of the input) into an additional fully connected layer to predict the sentiment. During fine-tuning, the cross-entropy loss between the prediction and the label on sentiment analysis data is minimized via gradient-based algorithms, where the additional layer is trained from scratch while pretrained parameters of BERT are updated. BERT does more than sentiment analysis. The general language representations learned by the 350-million-parameter BERT from 250 billion training tokens advanced the state of the art for natural language tasks such as single text classification, text pair classification or regression, text tagging, and question answering.

Since a transformer encoder converts a sequence of input tokens into the same number of output representations, the encoder-only mode cannot generate a sequence of arbitrary length like in machine translation. Originally proposed for machine translation, the transformer architecture also has a decoder that autoregressively predicts the target sequence of arbitrary length, token by token, conditional on both encoder output and decoder output: (i) for conditioning on encoder output, encoder-decoder cross-attention (multi-head attention of decoder in Fig. 11.7.1) allows target tokens to attend to all input tokens; (ii) conditioning on decoder output is achieved by a causal attention pattern (masked multi-head attention of decoder in Fig. 11.7.1), where any target token can only attend to past and present tokens in the target sequence.

As an example of the pretrained transformer encoder-decoder, T5 (Text-to-Text Transfer Transformer) unifies many tasks as the same text-to-text problem: for any task, the input of the encoder is a task description (e.g., “Summarize”, “:”) followed by task input (e.g., a sequence of tokens from an article), and the decoder predicts the task output (e.g., a sequence of tokens summarizing the input article). To perform as text-to-text, T5 is trained to generate some target text conditional on input text.

Fig. 11.9.3 Left: Pretraining T5 by predicting consecutive spans. The original sentence is “I”, “love”, “this”, “red”, “car”, where “love” is replaced by a special “<X>” token, and consecutive “red”, “car” are replaced by a special “<Y>” token. The target sequence ends with a special “<Z>” token. Right: Attention pattern in the transformer encoder-decoder. In the encoder self-attention (lower square), all input tokens attend to each other; In the encoder-decoder cross-attention (upper rectangle), each target token attends to all input tokens; In the decoder self-attention (upper triangle), each target token attends to present and past target tokens only (causal).¶

In T5, predicting consecutive span is also referred to as reconstructing corrupted text. With this objective, T5 is pretrained with 1000 billion tokens from the C4 (Colossal Clean Crawled Corpus) data, which consists of clean English text from the Web (Raffel et al., 2020).

Similar to BERT, T5 needs to be fine-tuned (updating T5 parameters) on task-specific training data to perform this task. Major differences from BERT fine-tuning include: (i) T5 input includes task descriptions; (ii) T5 can generate sequences with arbitrary length with its transformer decoder; (iii) No additional layers are required.

Fig. 11.9.4 Fine-tuning T5 for text summarization. Both the task description and article tokens are fed into the transformer encoder for predicting the summary.¶

Fig. 11.9.4 explains fine-tuning T5 using text summarization as an example. In this downstream task, the task description tokens “Summarize”, “:” followed by the article tokens are input to the encoder.

After fine-tuning, the 11-billion-parameter T5 (T5-11B) achieved state-of-the-art results on multiple encoding (e.g., classification) and generation (e.g., summarization) benchmarks. Since released, T5 has been extensively used in later research. For example, switch transformers are designed based off T5 to activate a subset of the parameters for better computational efficiency (Fedus et al., 2022). In a text-to-image model called Imagen, text is input to a frozen T5 encoder (T5-XXL) with 4.6 billion parameters (Saharia et al., 2022). The photorealistic text-to-image examples in Fig. 11.9.5 suggest that the T5 encoder alone may effectively represent text even without fine-tuning.

Fig. 11.9.6 Left: Pretraining GPT with language modeling. The target sequence is the input sequence shifted by one token. Both “<bos>” and “<eos>” are special tokens marking the beginning and end of sequences, respectively. Right: Attention pattern in the transformer decoder. Each token along the vertical axis attends to only its past tokens along the horizontal axis (causal).¶

Following the autoregressive language model training as described in Section 9.3.3, Fig. 11.9.6 illustrates GPT pretraining with a transformer encoder, where the target sequence is the input sequence shifted by one token. Note that the causal attention pattern in the transformer decoder enforces that each token can only attend to its past tokens (token-by-token prediction cannot attend to future tokens).

GPT has 100 million parameters and needs to be fine-tuned for individual downstream tasks. A much larger transformer-decoder language model, GPT-2, was introduced one year later (Radford et al., 2019). Compared with the original transformer decoder in GPT, pre-normalization (discussed in Section 11.8.3) and improved initialization and weight-scaling were adopted in GPT-2. Pretrained on 40 GB of text, the 1.5-billion-parameter GPT-2 obtained the state-of-the-art results on language modeling benchmarks and promising results on multiple other tasks without updating the parameters or architecture.

GPT-2 demonstrated potential of using the same language model for multiple tasks without updating the model. This is more computationally efficient than fine-tuning, which requires model updates via gradient computation.

Before explaining the more computationally efficient use of language models without parameter update, recall Section 9.5 that a language model can be trained to generate a text sequence conditional on some prefix text sequence. Thus, a pretrained language model may generate the task output as a sequence without parameter update, conditional on an input sequence with the task description, task-specific input-output examples, and a prompt (task input). This learning paradigm can be further categorized into zero-shot, one-shot, and few-shot, when there is no, one, or a few task-specific input-output examples, respectively (Fig. 11.9.7). 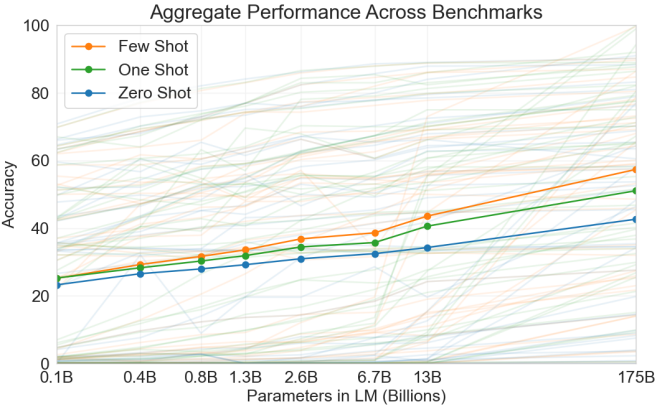 These three settings were tested in GPT-3 (Brown et al., 2020), whose largest version uses data and model size about two orders of magnitude larger than those in GPT-2. GPT-3 uses the same transformer decoder architecture in its direct predecessor GPT-2 except that attention patterns (right of Fig. 11.9.6) are sparser at alternating layers. Pretrained with 300 billion tokens, GPT-3 performs better with larger model size, where few-shot performance increases most rapidly (Fig. 11.9.8). Although enjoying computational efficiency, GPT-3 few-shot learning underperformed the state-of-the-art fine-tuned models that require model updates. Nonetheless, GPT-3 has powered a wide range of downstream applications across the Web: it was generating 4.5 billions words every day around nine months of its API release.

Fig. 11.9.9 Transformer language model performance improves smoothly as we increase the model size, dataset size, and amount of compute used for training. For optimal performance all three factors must be scaled up in tandem. Empirical performance has a power-law relationship with each individual factor when not bottlenecked by the other two (caption adapted and figure taken from Kaplan et al. (2020)).¶

As shown in Fig. 11.9.9, precise power-law scaling can be observed in the performance with respect to the model size (number of parameters, excluding embedding layers), dataset size (number of training tokens), and amount of training compute (PetaFLOP/s-days, excluding embedding layers). In general, increasing all these three factors in tandem leads to better performance. However, how to increase them in tandem still remains a matter of debate (Hoffmann et al., 2022). 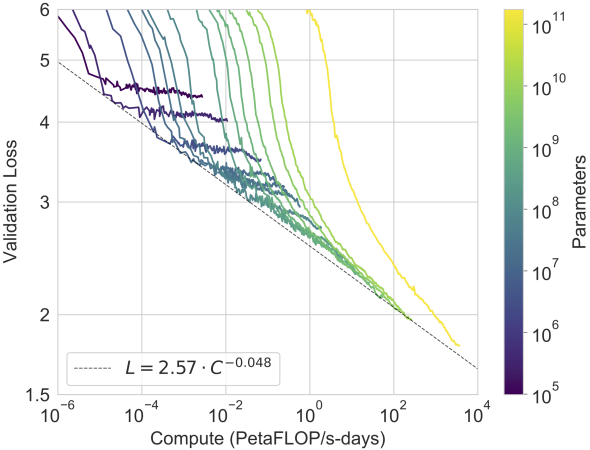 Fig. 11.9.11 GPT-3 performance (cross-entropy validation loss) follows a power-law trend with the amount of compute used for training. The power-law behavior observed in Kaplan et al. (2020) continues for an additional two orders of magnitude with only small deviations from the predicted curve. Embedding parameters are excluded from compute and parameter counts (caption adapted and figure taken from Brown et al. (2020)).¶

The empirical scaling behaviors in Kaplan et al. (2020) have been tested in subsequent large transformer models. For example, GPT-3 supported this hypothesis with two more orders of magnitude in Fig. 11.9.11.